While my anthotypes bleach in the sun, I am reminded of another experiment I did some years ago.  I had had my crystal ball photos compared to pinhole images so often I decided to try a pinhole camera just for laughs.

Pinhole cameras are insanely simple devices consisting of a box with a small hole.  The earliest versions, called camera obscuras, were nothing more than a darkened room with a small hole for light to peek through an otherwise darkened window.  The scene outside was projected up-side down on the wall opposite the hole for the occupants’ viewing pleasure.  Scaling the idea down, later versions had a transparent or translucent back on which one could place a piece of paper and trace an image.  Some master painters used this as a starting point for their work.  Even later, photo-sensitive materials were placed in the back to capture the image.  The box in question can be any size.  One was recently made in California that was three stories high.  Others are as small as matchboxes — and are, in fact, matchboxes.  Most are one-shot cameras before reloading.  A few are designed for rolls of film.  Some, like mine, are very crude while others are precision tools and even pieces of art in their own right.

For mine, I wanted something portable enough to carry multiple cameras at once so I could take just one shot, see how it worked and try again or else take a whole lot of shots out in the field for later development.  I settled on using an opaque 35mm film canister.  It was small enough to stuff a few in my pocket and, as I am still a fan of film, I have an ample supply.  I cut a small hole in the side of the can and then covered the hole with a piece of foil tape on the inside and outside.  I poked a hole in the foil tape with a beading needle.  Taking a piece of black electrical tape that was larger than the cut-out, I taped down the piece of plastic that I’d cut from the side of the canister.  In the darkroom, I cut a piece of photo paper about the size of a 35mm negative and slid it into the canister opposite the hole, then snapped the lid closed.  Out in the field, I set the canister down on a level surface, opened the electrical-tape flap, counted out a few seconds (10- 45 for my camera outside, depending on how bright the sun is or as long as an hour indoors), closed the flap and went home to develop the paper negative.

The results are, unsurprisingly, crude. But, what fun!  Look, Ma!  No batteries, gears, switches or even glass!

For further reading on pinhole camera construction, I recommendDIYPhotography.net. 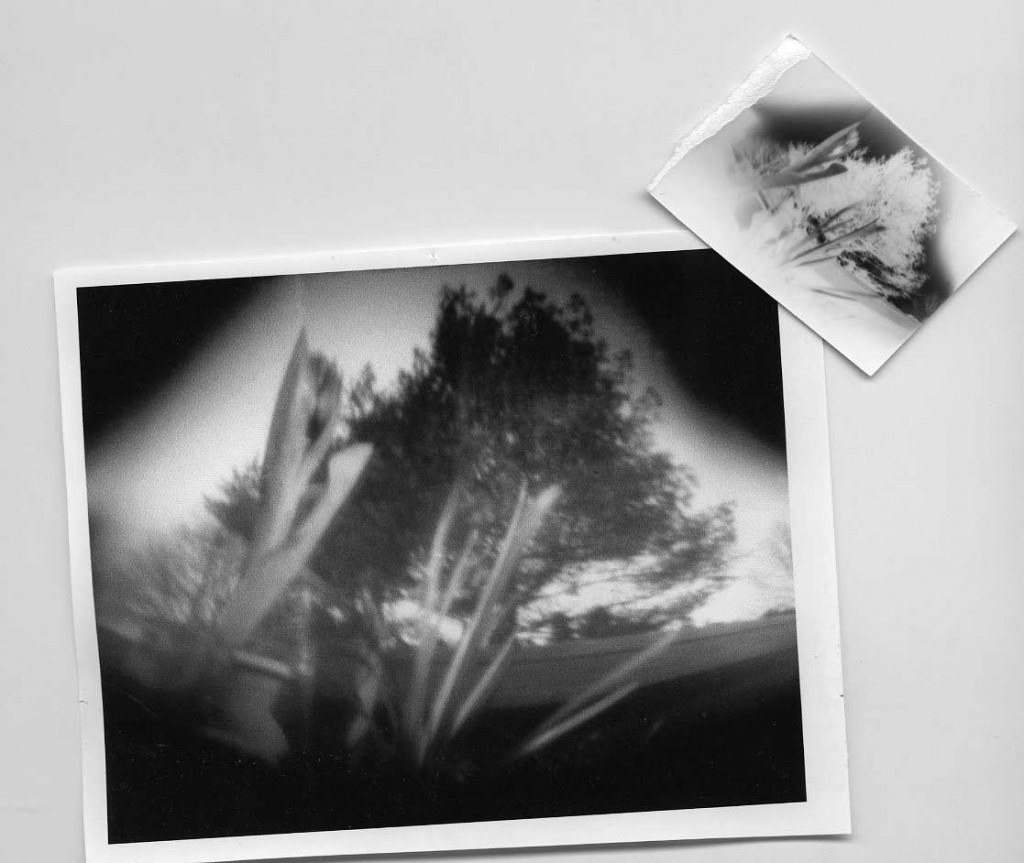 An early test of my film can pinhole camera, a photo of a tree and some tulips. The smaller image is the actual photo negative taken in the camera and the larger one is a positive print made from a scan of the paper negative.

A third-generation, informally trained photographer, Heather Siple has been taking pictures since she was old enough to hold a point-and-shoot steady. Her work has appeared across the US and internationally in museums, galleries and publications. Siple is the founder of the photo group ArtLane PCG .
View all posts by heather →
This entry was posted in Equipment Notes and tagged lomography, photography, toy camera. Bookmark the permalink.