Halloween is now upon us.  The leaves are colorful. The jack-o-lanterns are bright.  Kids and adults are dressing in their wildest ways.  It’s a time ripe with photo ops for those inclined toward the documentary and a fuel for the creative fires for those more inclined to make up their own visions.

I consider Halloween a time to celebrate creativity, whether carving a pumpkin, making up a new costume out of some old curtains, or experimenting with something new with my camera.  I make it an opportunity to take a chance.  Scott Adams, creator of “Dilbert” said, “Creativity is allowing yourself to make mistakes.  Art is knowing which ones to keep.”  The best way to make mistakes is to try something different. 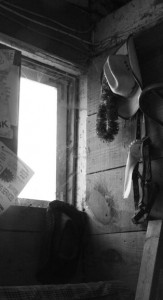 Hats in my daughter's favorite haunt - the barn - lit in the chiaroscuro style. I first learned of the style as a challenge from a friend and it has become a staple in my repertoire.

Why not try a new style, like chiaroscuro?  This Renaissance style uses a light source located to the side or behind the subject to illuminate the subject and part of the scene, making what is lit emerge from the darkness.  A little goblin?  Your true love’s face?  A broom in the corner?

Or, how about a new trick to make a treat?  Create soft focus by rubbing Vaseline on a filter (never the lens!!!) or breathing on it to fog it and shooting through it when just enough of the picture is in focus the way you want.

Find an interesting piece of glass that you can hold in front of the lens to use as a make-shift filter.

And if your pictures aren’t stellar on the first try?  Practice makes perfect!  It takes 10,000 hours to master anything and that’s a lot of mistake-making along the way!  It took me several years to get the hang of composing in a circle, and the first pictures I did are nothing exciting to me now, but if I’d never tried that quirky little toy, what wonderful fun I’d have missed creating and sharing the succeeding pictures later!

A third-generation, informally trained photographer, Heather Siple has been taking pictures since she was old enough to hold a point-and-shoot steady. Her work has appeared across the US and internationally in museums, galleries and publications. Siple is the founder of the photo group ArtLane PCG .
View all posts by heather →
This entry was posted in Art Thoughts and tagged composition, equipment, photography. Bookmark the permalink.