Why I Love Point-and-Shoots Part 1

It may seem odd to those who’ve seen me working on projects intended for public display, wielding cameras with big lenses, hooded flash, hand-held light meter and all the fancy works, but when I’m doing my family pictures I’m as likely as not to pull out the handy point-and-shoot.  For that matter, like many 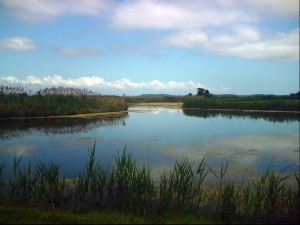 This shot was taken with my "Point-and-Pray" camera while chaperoning a field trip that involved sand, mud, salt water and lots of 2nd graders on a very hands-on expedition. Not the time and place for an expensive camera I have to keep clean and dry!

serious photographers, I do use point-and-shoots for pictures not intended for the family album.  They are incredibly easy to carry, offer limited manual control and require limited attention to exposure, have enough resolution to have a picture you can enjoy and because of their simplicity allow the photographer an easy tool with which to concentrate on the heart of the image- the composition.

One of my handiest toys is a GoPro® Hero.  It straps onto my wrist in a waterproof, shock-resistant housing.  It has no view screen, only a tiny viewfinder that is so small that it is very hard to see through, though not impossible.  I call it my “Point-and-Pray” camera.  It has no controls for lighting and no flash.  The lens is fixed in place with no adjustable focus.  I usually use it by aiming in the right general direction, and press the button.  The files are relatively small.  The new cameras are 5MP.  However, the camera weighs next to nothing.  It can go to the beach without getting sand in the works.  If it gets dropped in water, or someone spills their drink on it, it’s safe.   I’ve tumbled down a mountain with it and it’s still working.  If I do break it, it won’t cost a small fortune to replace.  It is the only camera I’ve ever had for which I could ever say all of this.  After years of experience, I know generally where to stand, crouch or lie on the ground to get a good angle without looking.  Sometimes I get great shots.  Some shots can be cropped later and some are shots I’ll just delete. 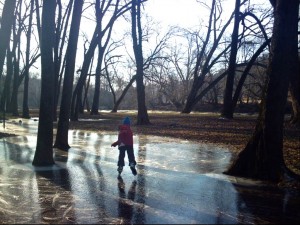 At times like this, I don't want to sit on the sidelines shooting; I want to play, too! With a little point and-shoot, I can tuck the camera safely in a pocket where it won't swing around or get tripped over and I still have some fun memories of our day. This was another shot taken with the "Point-and-Pray."

The camera certainly has its limits.  I probably won’t be doing a solo exhibition in a gallery with the shots from this one anytime soon because the resolution is lower than I generally want, even if I’m inclined to spend more time using The Force to frame my pictures than I generally do now as an artist.  But, I can carry it anywhere for taking those unplanned, one-moment-in-a-million shots and have gotten some nice shots doing so.

A third-generation, informally trained photographer, Heather Siple has been taking pictures since she was old enough to hold a point-and-shoot steady. Her work has appeared across the US and internationally in museums, galleries and publications. Siple is the founder of the photo group ArtLane PCG .
View all posts by heather →
This entry was posted in Equipment Notes and tagged color, family, Hero, point-and-shoot. Bookmark the permalink.

6 Responses to Why I Love Point-and-Shoots Part 1